The Five Fathom Hole Trail is one of several trails in the Musquash Estuary Nature Preserve. The others are the Black Beach Trail, and the Lorneville Link Trail that provides a link between the two.

There are two things you should consider while planning your hike of this trail. The first is the thick fog that is a regular occurrence in the Bay of Fundy. It is best to wait until later in the day until the fog has burned off if you want to take full advantage of the views. It is also nice to take a walk through the muted colors of the thick fog. The second is the tides. The estuary is known for it's large mudflats that only reveal themselves at low time. The mud is too thick to explore but the rich, brown color provides an interesting landscape to photograph or enjoy.

The Five Fathom Hole Trail cuts through the lush green moss in the mainly spruce, coastal forest. The first section of the trail is relatively flat and a bit wet. The trail crosses two arch bridges over small streams. The trail soon comes to an interpretive sign at an inlet that flows into the Musquash Estuary. The trail crosses several small bridges over streams that flow into the inlet. Each bridge provides a glimpse of the grassy wetlands of the inlet.

The trail comes to a trail junction where you have a choice to make. Turn left and continue on the main trail along the coast or take the trail to the right and go to Butler Creek Beach. The Butler Creek Beach side trail is 400 meters and travels through mostly old field that has grown up with alders. It passes the abutments of an old bridge that used to cross the inlet and an old building that has collapsed. The building is surrounded by a stand of aspen trees.

Continue past the abutments and you will soon emerge onto the rocky shore of Butler Creek Beach. If you look up the beach to the right you will see the dock and boats at Five Fathom Hole. Looking to the left provides views of the rocky coastline of the estuary.

Returning to the main trail will once again take you through the moss laden, spruce forest. The trail comes out to a small beach in a cove. The rock on the beach gives way to the thick, brown mud of the estuary at low tide. After this first beach the trails becomes more strenuous and starts to climb and descend along the rugged coastline. There are several lookouts along the way.

At this point you can return the way you came or continue on the Lorneville Link Trail to the Black Beach Trail.

The Musquash Estuary - an important habitat - saved for future generations

Musquash Estuary is the last fully functioning estuary on the Bay of Fundy - but what exactly are estuaries and why are they important?

The term estuary refers to a place where fresh and salt water meet - where a river flows into the ocean. Estuaries are among the most productive ecosystems on earth because of nutrients stirred up by the rise and fall of the tide. As a result, estuaries support a diverse abundance of flora and fauna, and historically provided the means of life for many people who relied on those rich natural resources. This is certainly true of the Musquash Estuary. 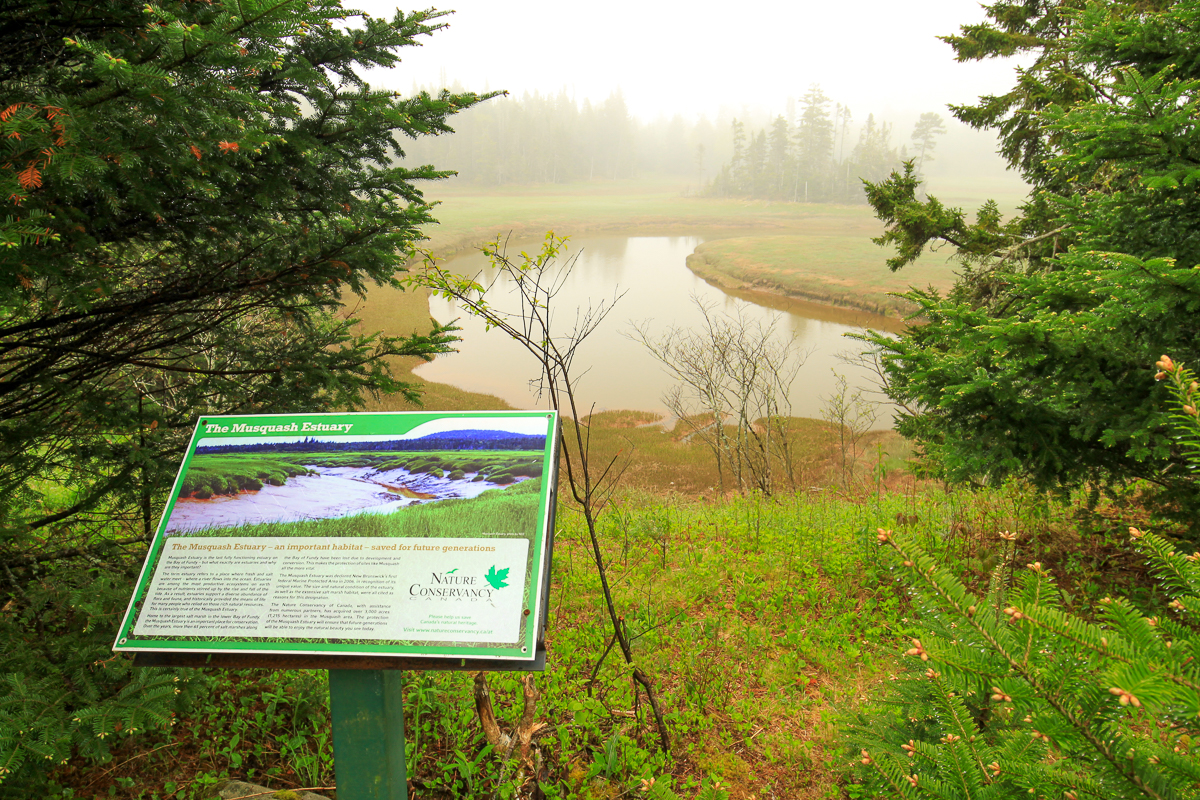 Home to the largest salt marsh in the lower Bay of Fundy, the Musquash Estuary is an important place for conservation. Over the years, more than 65 percent of salt marshes along the Bay of Fundy have been lost due to development and conversion. This makes the protection of sites like Musquash all the more vital.

The Musquash Estuary was declared New Brunswick's first federal Marine Protected Area in 2006, in recognition of its unique value. The size and natural condition of the estuary, as well as the extensive salt marsh habitat, were all cited as reasons for this designation.

The Nature Conservancy of Canada, with assistance from numerous partners, has acquired over 3,000 acres (1,215 hectares) in the Musquash area. The protection of the Musquash Estuary will ensure that future generations will be able to enjoy the natural beauty you see today.

Take Route 1 west from Saint John. Take exit 103 to Prince of Wales Road and turn left. After a short distance you will come to Five Fathom Hole Road. Turn left on the road and drive until after the road turns sharply to the right. After crossing a clearing for powerlines you will find a small dirt road on the left. This road is the entrance to the parking lot for the Five Fathom Hole Trail.

Other Trails in the area